UNDER THE SPOTLIGHT │ Ancient Egyptian Collections in Museums in Serbia 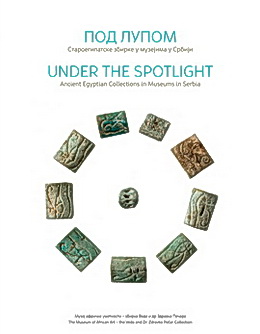 The exhibition brings valuable and to this point rarely, if ever, exhibited objects from ancient-Egyptian collections in museums in Serbia. The exhibition is based on the collaboration of 11 institutions: the City Museum Vršac, Town Museum of Sombor, City Museum of Subotica, Museum of Srem, Užice National Museum, Belgrade City Museum, Museum of Yugoslavia, Jewish Historical Museum in Belgrade, National Museum in Belgrade, the Republic Institute for the Protection of Cultural Monuments of Serbia – Belgrade and the Museum of African Art as host and project initiator.

The artefacts are linked to temples and tombs, and chronologically speaking they are linked to the period spanning from the Old Kingdom to the Roman Era. The exhibition reflects also on the widespread fascination with Egypt and its ancient culture, which stirred (in this part of the world) the adventurous spirit of wealthy travellers, and continues to inspire to the present day.

The exhibition was organized to mark 111 years of diplomatic relations between Serbia and Egypt.

The exhibition was opened by H. E. Mr. Amr Aljowaily, Ambassador of the Arab Republic of Egypt.

At least since the Renaissance onward, ancient Egyptian artefacts were collected and displayed in royal and princely Wunderkammern around Europe and later in “cabinets of curiosities” belonging to more “common” people, yet connected to aristocracy, before being transferred into numerous public museums across the globe, mostly established during the nineteenth century CE. In comparison to other European countries and their museums, the number of Egyptian artefacts in museums in Serbia is modest at best, however, almost all Egyptian artefacts may be classified under a common denominator: the realm of intellectual fascination of Western Europe with Ancient Egypt, reinforced through ancient sources like the Bible and classical authors.

Egyptian artefacts are scattered across twelve different museums in Serbia and it is approximated that there are 196 objects. While both sporadic and systematic research on the corpus of ancient Egyptian antiquities in Serbia has already been compiled, the collections themselves are, regrettably, still mostly unknown to the general public.

Chronologically, they span a period from the Old Kingdom to the Roman era – approximately from 2686 BCE to the fourth century CE – i.e. almost every historical period of the ancient Egyptian past. Almost all of them are unfortunately of unknown provenance, since they mostly became part of present-day museum collections in Serbia, as souvenirs of travellers to Egypt (for the most part from the second part of the 19th century CE onward), as gifts to important statesmen, such as Josip Broz Tito (1892-1980, leader and president of SFR Yugoslavia), or as random archaeological findings and rare museum acquisitions. Thus, even though there is little definite information regarding their context, function, or date.

Accompanying programs of the exhibition „Under the Spotlight“

As part of the standard MAA program „Sunday at the MAA“, we invite you to join our curator guided tours of the exhibition: