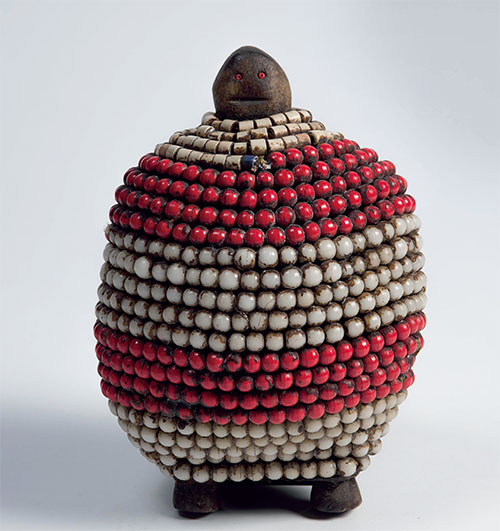 The Namchi or Dowayo people (Dowayo – sons/daughters of people) from the mountain ranges in north Cameroon is known for making dolls which are considered among the finest in Africa by collectors and aficionados of African art. Coming from the heart of Africa into the heart of Belgrade, this fertility doll is a gift of US ambassador in Cameroon, H.E. Ms. Janet Garvey, to the Museum of African Art.

The Namchi dolls are made of wood, by blacksmiths. They are recognizable by their proportionally small head and elongated neck. Such wooden dolls are used without any additional decorations as playtoys by girls, while preparing themselves for motherhood. The girls carry these dolls strapped to their backs, in the same way that mothers carry their infants.

However, as is the case with many other African communities, these dolls may have another role of promoting fertility. Women, who want to ensure offspring, use them as a magical “means” that is supposed to help them in that respect. Used in this context, the dolls are decorated with beads, strings of pearls, cowrie shells, metal bells, amulets and leather straps, while the eyes are embellished with two tiny colored beads. Women carry the dolls with them, tucked into their clothes and take care of them as they would a real child. Thereby, the women’s readiness to become mothers is communicated to the members of the community, as well.