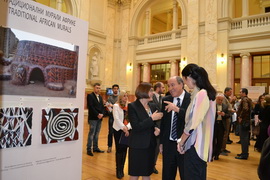 The National Assembly of Serbia hosted on December 8, 2015 the opening of the Museum of African Art's visiting exhibition titled “Traditional Murals of Africa” ​​by art historian Nаtаša Nјеgоvаnоvić Ristić.

The attendees were addressed by the President of the Assembly of Serbia – Maja Gojkovic, the Ambassador of Morocco in Serbia – Abdallah Zagour and Acting Director of the Museum of African Art – Marija Аlеksić.

The opening ceremony was attended by many MPs, representatives from the political, public and cultural life of Serbia and ambassadors of African and Arab countries present in Serbia.