THE BORDER IS CLOSED 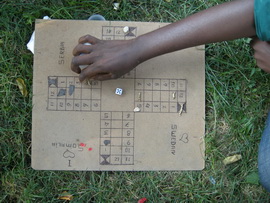 an exhibition about migrations and identities

Working with migrants in the asylum protection centres in Serbia over the course of several years, the artists have created mixed-media artworks such as “migrant maps”, written and illustrated works on textiles and an interactive application. The exhibition is complemented with authentic audio recordings – stories/statements/testimonies of asylum seekers, capturing the female side of migrations as well. Also part of the exhibition is a unique board-game created by asylum seekers in one of the camps. Its name – The Border is Closed, inspired the making of this exhibition.

With this exhibition, the Museum of African Art opens its doors to discussions and criticism through which it takes an active role in the reevaluation of its position with regard to different social realities, and also, the history of its own exhibiting practices.

Talk on art and migration was organised as part of the Trans Europa Festival 2015, on friday October 2nd 2015, at Belgrade Youth Centre. Take a look at the curatorial statement (.pdf).