THE NIGHT OF MUSEUMS 2009 AT THE MUSEUM OF AFRICAN ART, BELGRADE 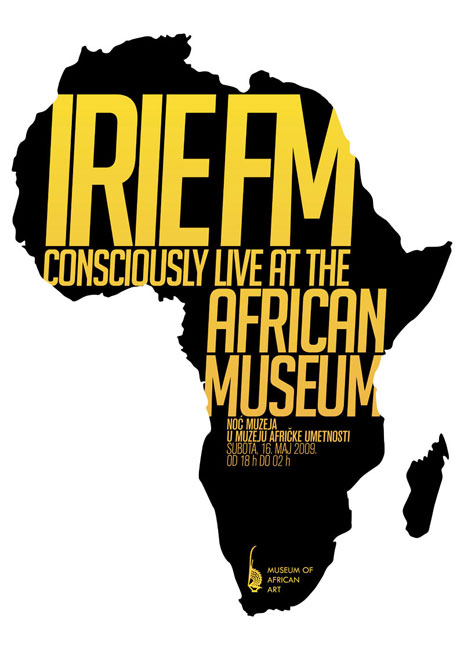 Take the midnight train to Africa – visit the Museum of African Art on the Night of Museum 2009 and find the African roots of reggae music in the authentic artistic expression of the traditional African artist.

Reggae as a form of longing for the reestablishment of an Afican identity, reflects also the return of the Jamaican slave to his homeland. The uprising of the slaves and revival of all that was considered to be authentically African found its creative outcome not only in music, but also the visual and performing arts, all of which play an important part of popular culture.

The idea and slogan Back to Africa is one of the central motifs of rastafarianism and reggae, which expressed the longing for the reestablishment of African roots, the wakening of an African identity wherever one's home was and the deeply embeded inspiration found in African traditional artistic expression. This musical style, based on African heritage, but born in the African diaspora of the Carribean region, was soon accepted and became very popular across the African continent and the world.

The main event in the NIGHT OF MUSEUMS 2009 will be the performance of reggae band IRIE FM, starting at 10 p.m. Ten musicians will, through their creativity and original style deliver songs from their new album Cool Youths Rule the Roots! The concert will take place in the Dome of the Museum of African Art.

Experiencing the Museum at night, its permanent display and on-going exhibition Mwana hiti: more than just a doll, is an invitation to discover one part of the traditional heritage of Africa: masks, ancestral figures, fetishes, objects of cult and magic, decorative and objects of everyday use. In a particular pan-african context, classical African art exhibited in the Museum can be perceived as an expression of a pan-African identity.