Sunday at the MAA 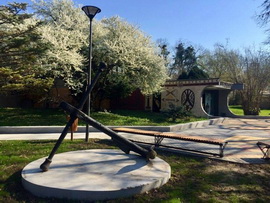 The “Sunday at the MAA” programme is organised every Sunday from 11 am to 1 pm and consists of two parallel programs: GUIDED TOUR (for adults) and WORKSHOPS FOR CHILDREN (for 4-12 year olds). 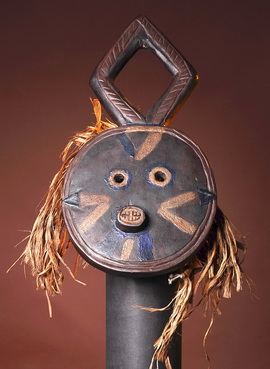 The topical workshops “Fantastic forms...” are conceived to introduce the youngest visitors of the Museum and future African art enthusiasts into the basic stylistic traits of some of the most beautiful examples of West African masks and sculptures, exhibited on the permanent display of the Museum.

Although reduced, this is an example of a highly stylized and abstract West African mask which is a useful example in learning about some of the basic geometrical shapes that can be used in artistic expression: the circle, triangle, zigzag line... This mask, like many others from the traditional complex of West African peoples, is charged in symbolism: the face of the mask as circle – the symbol of the sun and pronounced horns, derived from the antelope or bovine.

Alongside other masks used in the goli ceremony, the Kple Kple mask was worn during dances which were a day-long event and their primary role was to bring good fortune to the community. In the traditional context the Kple Kple mask was always worn by young men, however, during the performance all children in the community joined the dancer in song.

Guided by our expert team, children, in the company of children their age, through film and storytelling, collage and different combined techniques, are offered the opportunity to make their own Kple Kple mask.

The Workshop is in Serbian.

** The workshop does not require reservation!

*** Parents and guardians are kindly asked to bring children on time so that children are able to fully participate in the structured and prepared programme, and take full advantage of the creative time spent in the museum. 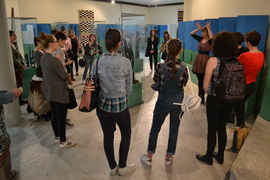 Guided tours as part of the Sunday at the MAA programme are designed to meet the widest museum audience and their interests. Curators and experts in specific fields of African art and culture, prepare topical tours focusing on the different segments of the permanent display and the (at that moment) thematic exhibition. If you have not previously had the opportunity to be familiarized with the objects on the permanent display, or if the current exhibition in the small gallery of the Museum is of particular interest, these guided tours are just for you!

The Guided Tour is in Serbian.

** The guided tour is for adults, but suitable for younger adults as well (13-18 year olds)

Some of the finest examples of West and Central African material culture are exhibited on the permanent display of the Museum. Young experts who were part of the “Practicum” program (designed as training for the curatorial profession) have prepared interesting stories about the beliefs, practices, and everyday life, transmitted through the mask, sculpture, textiles and other items on the permanent display. Each guide brings his/her own field of expertise – whether ethnology, art history, sociology, archaeology, or history – as well as their own creative contributions to forming an interesting story about the objects on display. The guided tours are intended for the widest interests and audiences, and will bring you closer to understanding the wealth of creative expression, religious ideas and practices among in the traditional life of African communities.

Sunday, 14 January, 11:00
THE MEANING OF THE ANCESTRAL CULT AMONG THE PEOPLES OF WEST AFRICA

African religious practice with its mystique and uniqueness, has provoked worldwide interest over the centuries. The ancestral cult was prevalant in almost every part of Africa and the veneration of ancestors held an important role in many ceremonies. On the permanent display of the Museum, there areshowcased cult figures and masks which were used by the Dogon, Senufo, Bambara, Dan and Gere peoples.

Guided by: Dragana Ćurčin, Undergraduate student of Ethnology and Anthropology

As part of the collections of art and craft objects of the Dogon, Bambara, Baule and Senufo, there are valuable examples of masks and sculptures belonging to the traditional belief corpus of these peoples. Each mask and sculpture played an important role in different rituals. This guided tour will highlight the material culture of the Dogon, Bamana, Baule and Senufo which can be found on the permanent display of the Museum.

What is the situation in European artistic circles in the late 19th century when the fruits of African material culture became available to the general European public? What interest did African masks, sculptures and textiles provoke among painters such as Matisse, Picasso, Darren, Vlaminck...? Join us on this tour through the permanent display of the Museum and let us trace works of art like the ones that produced new directions in art in the 20th century.

This guided tour is an introduction to the traditional legends of different cultures of Africa, above all the Dogon, Bambara, Senufo and Ashanti. Through the tour you will find out about the first “beings” that walked the land and how they influenced their descendants – humans. We invite you to join us and learn how myths and legends permeate African reality today.

Ignorance often produces misunderstanding, fear and prejudice. Due to lack of education, we have a tendency to diminish the value of what we do not know and do not understand. If we want to overcome the prejudices that we have about the culture, belief systems, art and lifestyles of African people, we need to understand what is at the core of all things, and that is a philosophy. The guided tour will focus on Ubuntu philosophy and the ethical system of the Akan, in order to enhance our philosophical knowledge of African peoples.

Sunday, 18 February, 11:00
FROM LIFE TO DEATH – THE RITUALS OF WEST AFRICAN COMMUNITIES

The guided tour through the permanent display will introduce you to the secret world ritual among West African communities, as well as the role of music, dance, masks and sculptures within it. This is an opportunity to learn that rituals are far more than just “music and dance”, and that they are key communication tools that are used to mark important events in both the life of the community and the individual, as part of it. Join us on our tour through the permanent display and discover the world of African rituals.

Sunday, 25 February, 11:00
(POST)YUGOSLAV LIFE OF THE MUSEUM OF AFRICAN ART

Tito traveled the length and breadth of Africa, and Belgrade streets bear the names of its kings and revolutionaries. For forty years in this city, in Andre Nikolića 14, Street, there is the Museum of African Art. In all this time, the Museum, as an architectural structure and institution, has grown, changed and adapted to new contexts. Walking through the concrete structure of the MAA and garden that surrounds it, you will get to know the Museum as a place of reconciliation and compromise, and learn more about the economic, political and cultural changes that formed over the course of forty years.

Guided by: Sara Nikolić, Student of Ethnology and Anthropology (Practicum)

Sunday, 4 March, 11:00
THE MYSTERIOUS POWER OF THE AFRICAN MASK

The mask is an essential element in dance rituals, rites and ceremonies of African communities. Because of its magic and power, members of the community are treating the mask with great respect, from its creation and protection to participation in a variety of ritual and social occasions. Masked, and followed by musical instruments in certain rhythm, the mask wearer loses his identity and transformers into a supernatural being that allows communication between community members and the souls of ancestors.

Through this guided tour, we will learn about the laws, rituals, tools and decorative items, and try to understand all the ways in which these elements culminate into one whole- one community, with its specific characteristics, mythology and art. Having removed the prejudice, we will find many similarities and differences between our and their social systems, and most of all, point out all those genuinely identical nuances of everyday life, of big and small, powerful and powerless people, no matter what space and time they find themselves in.

Sunday, 18 March, 11:00
ZOOMORPHIC MOTIFS AND THEIR SYMBOLISM IN THE WEST AFRICAN ART

Animals are an essential part of African mythology, legends and cosmogony. We will talk about every type of artistic creation that has zoomorphic motifs. Whilst talking about the animals we will learn a lot about the people themselves, the way they see the world around them, the mutual relationship between humans and animals... Come to the permanent exhibition of the museum, and see through the eyes of African people how it is to live in an environment that is so full of life.