THE TRAVELLING CALABASH at the National Museum Kikinda 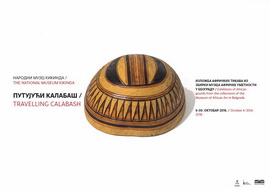 The African gourd is omnipresent! In its humble nature, it has an enduring appeal and has been used across the continent of Africa, penetrating into the imagination of both locals and travellers. Locals built a web of metaphors and myths around it, while travellers saw it as an inevitable part of the experienced and notional „African landscape“.

The exhibition tracks the calabash across the MAA's collections, from objects such as vessels and ladles, to musical instruments and examples of sculpture and textiles that reproduce the calabash motif. The scene of the exhibition is supported by postcards and photographs from the 1950s to the 1980s, as well as written and yet unpublished memories of the MAA's founders Zdravko and Veda Pečar from the times of their African sojourn.

We thank the National Museum Kikinda for their invitation to present to the citizens and visitors of Kikinda, the gourd collection of the Museum of African Art (Belgrade) During the Pumpkin Days 2016.