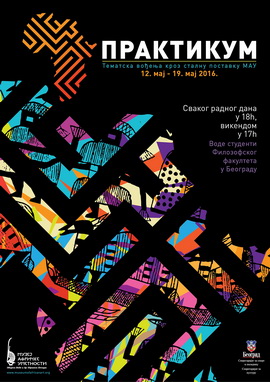 With the support of curators/mentors, the participants in this student program gain knowledge of African Art and develop the skills and techniques for conducting guided tours of the permanent display, thus giving them a sound introduction into the curatorial profession.

The students worked diligently for two months tailoring their themes, creating both elaborate and interesting methods of presentation.

Religion and tradition are deeply rooted in traditional African life, which becomes apparent in all aspects of individual and community life – birth, death, agriculture, respect of ancestors, etc. All these moments are marked by certain rituals led by particular members of the community who have been initiated, through rites of passage. To be initiated, means to have earned a new, special rank in society, which carries with it certain obligations and responsibilities regarding the transmittal of the knowledge acquired, to younger generations. By observing the masks and sculptures on the permanent display, we can learn something about these masked keepers of knowledge, their rituals and why are certain associations within the community  called “secret” societies?

If you can walk you can dance, if you can talk you can sing (Zimbabwean & Sudanese Proverb)

The first association to the African continent on a global level is a deep sense of rhythm and a secret connection with music. What is behind the term “African dance”? Why do we link a mystical rhythmic sensibility to the whole continent and what is it like when music is the building block of everyday life? Using different examples we will try to decipher and understand traditional African ritual dance and its influence on contemporary dancing styles.

The Encounter of Two Worlds – Africa through Travellwriting

National elements of African art have lured the attention of the West for centuries, but political, ideological and social occasions of the societies to whom the observers belonged have influenced the way these elements were interpreted.  Hence, travel literature is a very valuable source for the observation ideas, attitudes and prisms through which travellers were looking at the “new” art they were encountering. By considering medieval sources, across colonial literature, to modern writings, this guided tour enables the audience to experience the development and changes that travel literature was going through in throughout the centuries, and also to interpret, in a relevant way, the characteristics of African art that of the travellers, presented in their characteristic writing style. The comparison of the modern, scientific interpretations with what the travellers presented will make the audience understand how, particularly the European civilisation, throughout time, formed and changed its attitudes and relations toward African culture and art.

The Visual Identity of the Museum of African Art: Architecture, Design and the Permanent Display

The tour through the Museum of African Art and considerations about its visual identity, which creates its architecture, design and the permanent display, requires a very special guided tour. Namely, the focus of the tour are not the objects displayed and safeguarded by the Museum, but the building, its architecture, opened to the public in 1977. The design of the interior and permanent display, in its original and authentic form (evident today) were commissioned, conceptualised and realised with attention to the overall architecture and surroundings of the Museum of African Art as a conceptual whole. Following the multilayered and interesting visual identity of the MAA, the guided tour will lead visitors through both the exterior and interior, later additions and murals, as well as the newest layers that contribute to the making of a different MAA visual identity.

How much is an artist appreciated? What is the role of woman? What kind of initiations do children have to go through to earn the status of an adult? How do the head of a village or king express their social position, power, superiority and exclusivity? How are ancestors and death understood? Based on the material culture of West African peoples such as the Dogon, Senufo, Bambara and others, find out in which ways these artefacts have symbolised and affirmed the social statuses of certain individuals in society, and how those objects met individual needs, but also the cultural ideals and the notions of a community.

If you want to learn more about the origin of traditional African ceramics and fabrics, or if you are interested in how an artist lives, then you are welcome to visit this tour. Through the story about techniques and materials used to make traditional African objects we will learn more about the status of the creator-artist. We will try to dispel some of the prejudices which are still largely present (for example, that their African art is primitive and religious, and that the artists are unknown). Finally, we'll consider the motivation of the “African” artists today.

Hunting for Objects: the Pečar Couple as Collectors

The Pečar Couple – founders of the Museum of African Art in Belgrade, spent about twenty years in West Africa. Their residence on the continent inspired them, as did the ingenuity and creativity of the African artist. With a desire to share “among their own people” part of their love of the continent and collector’s passion, a collection of objects was acquired that makes today's permanent collection of the Museum. Even today, the permanent exhibition inspires us today and calls for a deeper understanding of the art and cultures of the West African nation.

Religion or Magic? Traditional Beliefs among the Peoples of West Africa

Old prejudices about African peoples have long been blurring the true picture of the achievements and philosophy of the many peoples of this continent. With the 20th century and by adopting an objective approach in the study of non-European cultures, African art, religion and mythology finally receive their rightful place in science – their uniqueness, excellence, originality, and in certain areas even exceptional advancement, have been recognized. Namely, among the Dogon, a West African population that lives in Mali, knowledge of the movement of celestial bodies was far ahead of modern science and telescopes, and certain astrological knowledge which is part of Dogon mythology has been confirmed in the second half of the 20th century with the help of modern technology and advanced scientific method. If this and similar information stimulate your interest and curiosity, visit the Museum of African Art and find interesting things about the traditional beliefs of the Dogon, Bambara, Senufo and others.

* Free entrance for all “Practicum 2016” programs.