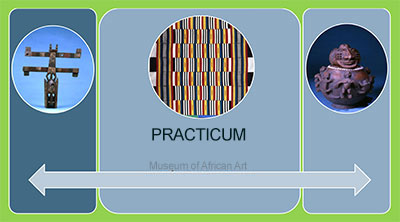 In cooperation with Belgrade Faculty of Philosophy’s Centre for Career Development, Museum of African Art has organised a practice program for final year students of Faculty of Philosophy in Belgrade. The students have worked hard for two months on their chosen topics, both through the substantiality of guiding and the interesting ways of presenting. Each student offered different view on the Museum’s permanent exhibit. The students will guide visitors through the permanent exhibit and provide them with the experience of Africa through nine different perspectives!

No entrance fee for those who come to the guided tour. Welcome!

THE SCHEDULE OF THE GUIDED TOUR:

“A Glimpse into West Africa through Myths, Religions and Rituals”

West Africa today, as it was in the past, is a mosaic of religious, ceremonial and ritual practices. Dance masks, which revive mythological stories, secret societies, funeral rites, agricultural ceremonies, magical rites, ancestral cults, are still live, in conjunction with contemporary life in big cities. Do you want to discover how religious and magical rituals in West Africa are performed? What the dance of the masks means? What wooden sculptures represent? What is stored in anthropomorphic ceramic jars? Visit the thematic guided tour through the permanent collection of the Museum of African Art and take a look into the world of the Dogon and Bamana peoples’ secret society rituals.

The African continent has always been a fascinating place for foreign explorers and young enthusiasts seeking for knowledge and adventure. How did the peoples from West Africa explain their own origin and creation of the world? How are myths woven into their history? Why does Dogon mythology fascinating scientists even today? These are some of the questions this tour will attempt to give answers to, at the same time tickling your imagination and curiosity for future explorations of the African continent.

With this guided tour we examine our experience of the two “Wests” – the region of West Africa, from where the greatest part of the permanent display of the Museum of African Art originates and Western Europe. The guided tour will reveal the path African art has journeyed from ordinary object to artwork respected for its beauty and mastery, and will show the ways in which African art influenced and inspired some of the greatest artists of the early 20th century in Europe: Modigliani, Picasso, Kirchner, Brancusi, etc. With a critical approach to the terms primitive and primitivism, and using examples from the permanent display, the tour will examine the importance of African art to the development of art history assumptions in the West.

If you are interested in finding out more about the history and context in which the Museum of African Art in Belgrade and its collections were created in the second half of the 20th century, as well as the influence of nineteenth century ideas on the creation of existing museum displays; if you are interested in the narratives on distant “exotic” peoples, primitivism” and creating narratives about “other” peoples in defense of Eurocentric and colonial ideas, you are very welcome to join us at the Museum of African Art in Belgrade, on Saterday, May 10th at 5 pm. By joining this thematic guided tour you will be able to reassess your aims and needs expressed in learning and making contact with other people, their ways of life and their pasts, but at the same time develop your own critical skills through observing visual representations that surround 20th century man in particular.

Life in Africa cannot be imagined without music. In addition to fulfilling the daily lives of African peoples, it also has a ceremonial, religious and ritual role. What sort of music is African music? Which instruments is it played on? What are the rituals in question? How do masks sing and dance? What has happened to traditional music today? Sociology student Milica Kostić will try and find some answers to these questions, and will offer examples as proof of the variety of musical rhythms that are to be found in West Africa.

“Footsteps to Adulthood – Initiation Rites among the Peoples of West Africa”

Coming of age on the African continent is marked by different stages which every child must successfully complete. Through this guided tour, we shall find out what the role of secret societies is in this process. What does the sound of drums announce? Where do masked dances in secret forests lead to? What is the symbolism of the Kalao bird among the Senufo people? How does the cognitive game – mancala pave the way to adulthood? Finally, we’ll find out what status initiated boys and girls gain.

The rich collection of the Museum of African Art holds stories on the position of women in West Africa. Who are they, what is their role in society, in particular, how does society asses the importance of their social role, which work are they responsible for and which are they not allowed to do, and what does the process of socialization include, are topic we will try to decipher by reading the symbolism found on authentic pieces belonging to the cultures of the Bambara, Dogon, Baga, Dan, Gere, Senufo and Ashanti peoples. The art of these communities, living in the present states of Mali, Guinea, Ivory Coast and Ghana will open a window revealing a landscape of the complex ways in which men and women play out their social roles. If you're curious, we invite you to visit the guided tour through the permanent display on May 13th 2014; we will offer a tour through the eyes of a woman (sociology student), which prompts you to think about your own gender identity.

“Zoomorphic Motifs in the Arts of West Africa: Mythology and Ritual Practice”

In African art we recognize different visual motifs, among which the animal motif is among the most common. African artists were inspired with animals surrounding their environment, often attributing to them extremely rich mythological significance. The thematic tour through the permanent collection of the Museum of African Art will give you answers to the following questions: which animals, according to legend, were the first to populate the world? How do hunters defend themselves from the bush spirits? Which animal is the symbol of the Poro secret society? Visit us and find out these and other interesting facts from the traditions of the Dogon, Bamana, and Senufo peoples of West Africa.

“The Rhythm of Life and Music of West Africa”

Come and find out why all of Africa dances, makes music and sings. Come and hear how the body can become a musical instrument and learn how to experience the effects of opiates without actual using them. What is more important, melody or rhythm, and which are male and which female instruments? How are instruments made, why are they considered to be sacred and how can music make us invincible... This is part of the mystery that we will discover through the guided tour of the Museum’s permanent display.