Exhibition based on the works created at the workshops for secondary school students:
“On the Paths of African Creativity” 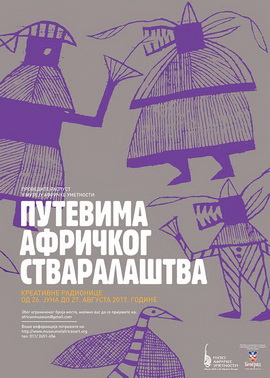 The workshops were held from June to august 2017. Following introductory presentations, participants had the opportunity to learn about the creative works of the Senufo people (Ivory Coast), the Fon (Benin) and the Beta Israel communities (Ethiopia). Practical work consisted of creating artworks, which the participants – along with the curatorial team – will assemble the exhibition, which is to open on Sunday, August 27 at 7 pm.

The workshops were conceptualized and led by Milica Josimov (sculptor) and Marija Miloš (curator), with the help of associates Milica Naumov (anthropologist) and Ana Knežević (art historian)

The “On the Paths of African Creativity – creative workshops and exhibitions” program was supported by the Secretariat for Sport and Youth (the Assembly of the City of Belgrade).

The exhibition will be on view until 3 September 2017.