Talk about a book on migrants
written by Aleš Šteger 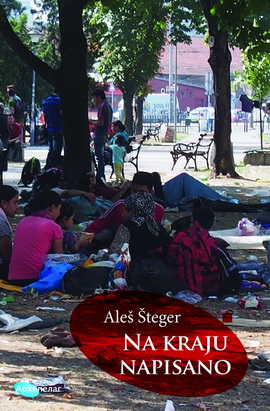 The Museum of African Art and the Arhipelag Publishing House organise a talk about the Finally written book by Aleš Šteger on Thursday, December 3rd, at 6 p.m. Šteger’s book, has recently been translated into Serbian and published in the edition of the Arhipelag.

The Finally written by Aleš Šteger is the first book written in European literature on the topic of current migrant crisis - a new great migration. The Arhipelag published the first printed edition of this book. The Finally written is consist of essays and notes, prose fragments and dramatic stories of Syrian refugees on the way from the Middle East, across Serbia, to Europe. Along with writing, Aleš Šteger did a series of documentary photos that are an integral part of his project.

Talk about the book dedicated to migrants takes place in the context of “The Border is Closed” exhibition, which is consist of migrant maps, works in textile, migrants‘ statements, applications and games that are "anonymous" migrants created at the Centers for Asylum Seekers in Serbia.

Aleš Šteger, a famous Slovenian poet, essayist, fiction writer, was born in 1973 in Ptuj. He won all the major awards for literature in Slovenia. His poems, novels and essays have been translated into more than twenty languages.