Exhibition opening, part of the "Days of Belgrade" event: 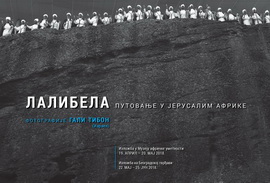 Ethiopia is one of the oldest Christian countries in the world, where Christianity was officially recognised as a religion in the 4th century. Today, the Ethiopian Orthodox Tewahedo Church gathers over 40 million believers.

The Christian tradition is inextricably linked with this country's culture and history. The holiest city and the most significant centre of pilgrimage is Lalibela, a little town situated in the northern mountainous area of Lasta, visited every year by large numbers of local believers, but increasingly also by foreign visitors.

Eleven monolithic churches, assumed to have been built during the reign of King Lalibela (12-13th century), were carved out of a soft red volcanic rock, below ground level, and connected through a network of tunnels and subterranean passages. Their construction represents an extraordinary architectural achievement, and since 1978, the churches have been under the protection of UNESCO. The spatial layout of the churches, which are grouped into two clusters, and the very name of the river Yordanos that divides them, are reminiscent of Jerusalem, imbuing the entire setting with an almost biblical aura. Since the 12th century when the churches were erected, religious services have been held without interruption.

GALI TIBBON is an award-winning photographer based in Jerusalem. In 2013 she was named Travel Photographer of the Year at the Sony World Photography Awards (WPO) in London for her documentary work on Lalibela, Ethiopia. Among her many awards are: the Moscow International Photo Award, Fotoweek DC, she is a two-time winner of the UNESCO Humanity Photo Award, and a National Geographic photo contest finalist (etc.). Her work explores the theme of religion, focusing on faith, capturing the spiritual and abstract emotions of the believers into her stills as she travels around the globe. Tibbon’s images are published regularly in renowned magazines and newspapers worldwide (Geo, National Geographic, Newsweek, Elle, Time, etc.). Her pictures are exhibited in museums, galleries and prestigious international photo festivals.

Her photo-diary from Lalibela – this “Jerusalem of Africa” – narrated through 24 photographs, is dominated by images of pilgrims on their journey and upon their arrival to their destination: long lines of barefoot devotees with walking sticks, wrapped in their shamma cloths – typical garments of the mountain – dwellers, who spend days moving through hilly terrains; believers strewn upon the tops of rocky cliffs encircling the churches; pilgrims resting in front of the walls of the Church of Saint George.

Using only natural light, Gali Tibbon evokes a shadowy, secluded atmosphere of churches and adjacent monastic cells, the silence of believers deeply immersed in prayer and contemplation. By utilizing black and white photography in the artistic process, the photographer successfully emphasises the texture of the rocks of the surrounding terrain – a prehistoric, timeless element, as background against which human figures are highlighted; the folds on their faces, of their clothes and turbans as if reflecting the layers of time. As a whole they tell the story of an ongoing pilgrimage which has been taking place in a virtually unaltered form for almost a thousand years, in a place where time seems to have been brought to a halt, yet where faith prevails.

The exhibition is the result of the cooperation between the Museum of African Art, Belgrade Fortress and Belgrade Photo Month.

The exhibition at the Belgrade Fortress will be opened from 22 May until 25 June 2018.

Guided tour with Gаli Тibbоn
* the program is in English

Lecture: “Lalibela: A Place of Worship”, by Aleksandra Prodanović Bojović, senior curator
The lecture will be followed by a guided tour with curator Emilia Epštajn.
* the program is in Serbian

Lecture: “The Ethiopian Cross: Symbol of Faith”, by Aleksandra Prodanović Bojović, senior curator
The lecture will be followed by a guided tour with curator Emilia Epštajn.
* the program is in Serbian